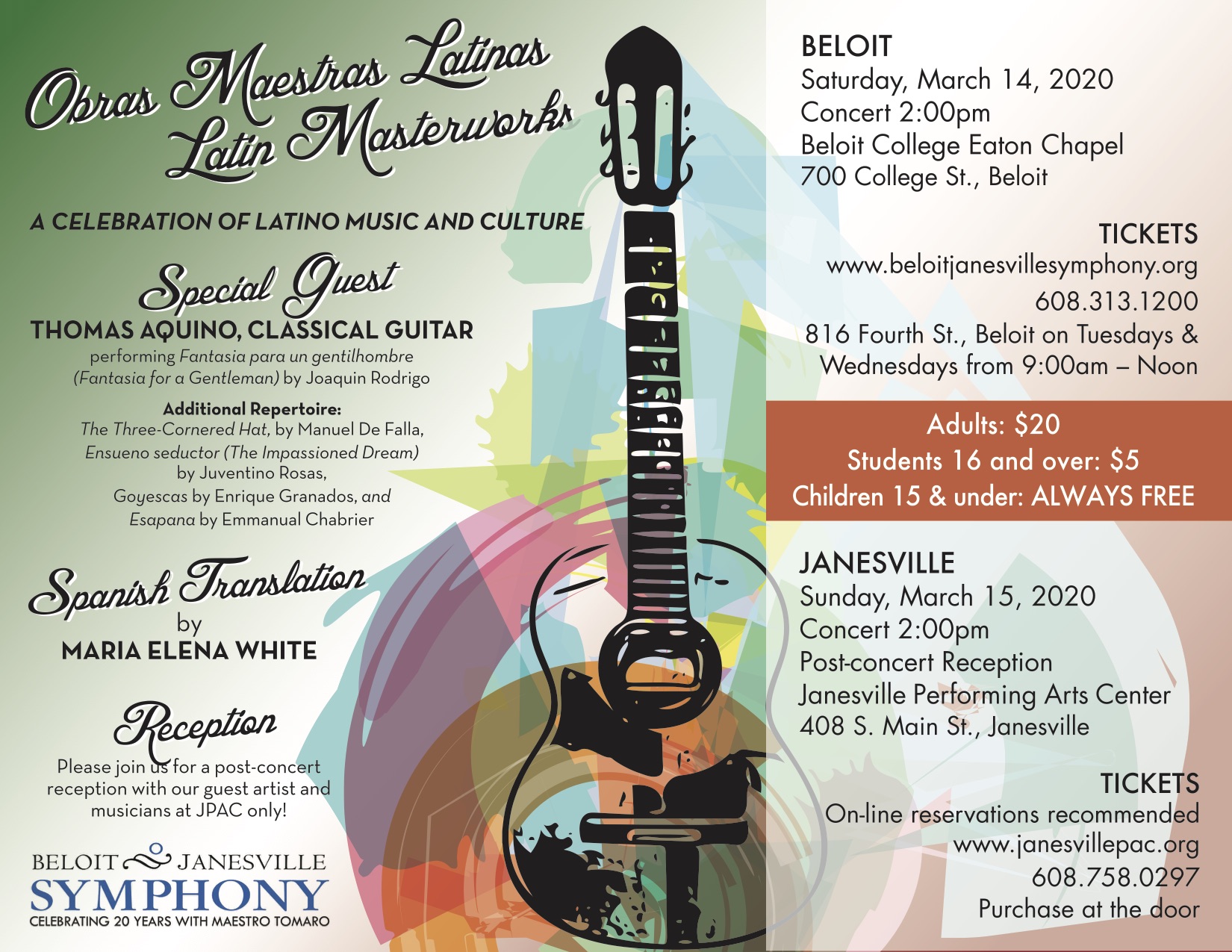 WHAT:  The Beloit Janesville Symphony Orchestra is pleased to present a unique and flavorful concert event: Obras Maestras Latinas, Latin Masterworks, a celebration of Latino music and culture. Our concert will feature the premiere performance with our orchestra of rising classical guitar virtuoso Thomas Aquino.

Mr. Aquino will perform one of the most popular guitar concertos, Joaquin Rodrigo’s Fantasia para un gentilhombre (Fantasia for a Gentleman), which is based upon a series of delightful melodies that can be traced back to the 17th century composer Gaspar Sanz. The concerto was composed on a request from Andres Segovia, who is widely regarded as the greatest classical guitarist of all time.

Other works on the program include Manuel De Falla’s vibrant score to the ballet The Three-Cornered Hat, first produced in 1919 by the great impresario Sergei Diaghilev with scenery by Pablo Picasso. The plot concerns a love story set in the eighteenth century in a small Spanish village, where a miller and his wife, although very much in love, flirt with passers-by in order to test each other’s affection.

We will round out our Latin musical feast with one of the most well-known works by Mexican composer Juventino Rosas, his Ensueno seductor (The Impassioned Dream) along with the hauntingly beautiful Goyescas by Enrique Granados, and Espana by Emmanuel Chabrier.

Maria Elena White is the BJSO Spanish-language liaison and translator. Be sure not to miss this unique exploration and celebration of Latino music and culture.

In  Janesville: at the Janesville Performing Arts Center, 408 S. Main St. Janesville, Sunday, March 15, 2020 at 2:00pm. There will be a reception to meet the guest artist in the JPAC Gallery following the concert.

In Beloit, tickets are available on-line at www.beloitjanesvillesmphony.org, at the BJSO Office at 816 Fourth St. Beloit on Tuesdays & Wednesdays from 9:00am – Noon; or by calling 608-313-1200; and at the door.

ABOUT THE GUEST ARTIST: Mr. Aquino is from Chicago, Illinois. He studied for ten years with Jack Cecchini, a prominent figure in the Chicago guitar community. Mr. Aquino was awarded the Barbara and David Jacobs Scholarship to attend the Indiana University Jacobs School of Music as an undergraduate. Thomas has taken master classes with leading guitarists such as Christopher Parkening, Jorge Caballero and Adam Holzman.

ABOUT BJSO: The Beloit Janesville Symphony Orchestra, now in its sixty-sixth year, is the professional symphony orchestra of Rock County. In addition to its series of classical and pops concerts, each year it performs Independence Day concerts in Janesville and Beloit, which are offered free to our audience. Beginning as a volunteer community orchestra in 1953 at Beloit College, it has grown into a respected regional orchestra in southern Wisconsin and northern Illinois.

The mission of the BJSO is to serve as a major cultural and educational resource to southern Wisconsin and northern Illinois by providing a rich variety of symphonic music and related cultural activities to the citizens, schools and other institutions in the area.

This season, we are also honoring Dr. Rob Tomaro’s 20th year as the Artistic Director and Conductor of the BJSO. 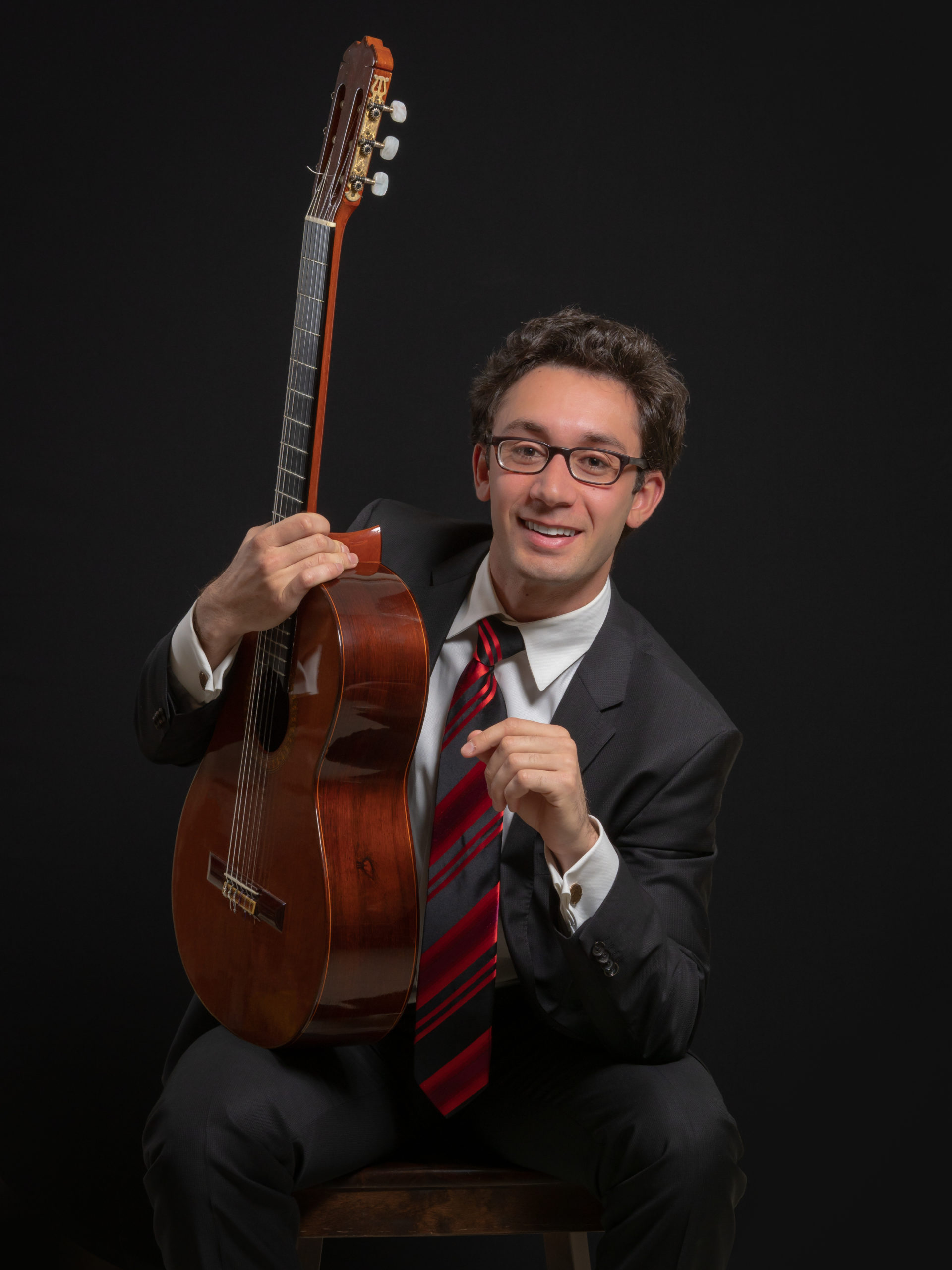