Discussion of inequity in working conditions.

Please note: A play called “SWEAT” is coming to Janesville on Oct. 17 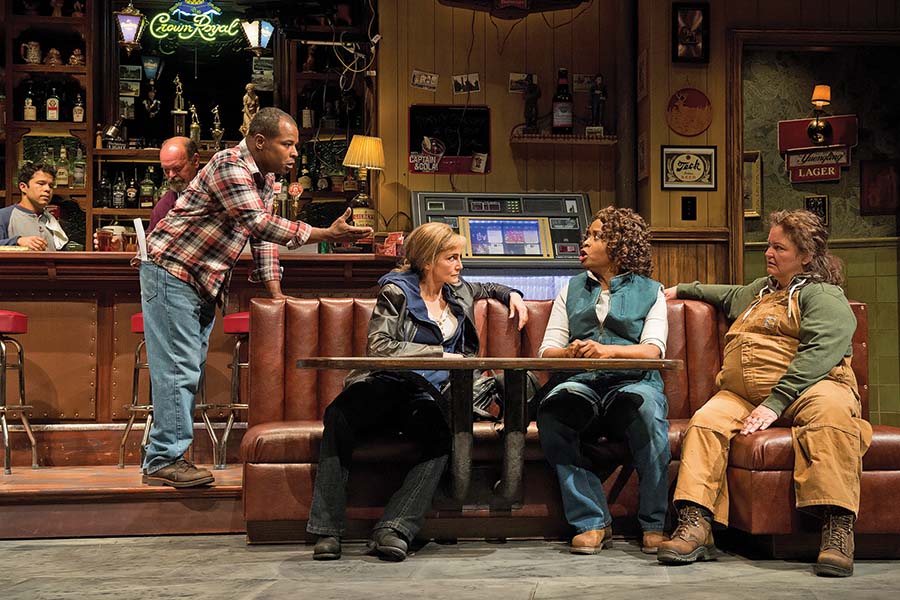 Brucie (Kevin Kenerly, front left) tries to get some time with Cynthia (Kimberly Scott, second from right) as her friends and the bar staff (Ensemble) wait to see what happens.

NEW YORK CITY: The Public Theater has announced that the company’s Mobile Unit will expand in September to launch a FREE tour of Lynn Nottage’s Sweat throughout the Midwest. The four-week tour, beginning Sept. 27, will travel through 18 cities across Michigan, Ohio, Pennsylvania, Minnesota, and Wisconsin.

“The Sweat Mobile National Tour is our most dramatic attempt to break out of our New York bubble and speak to those who the nonprofit theatre has largely ignored: the rural communities of the upper Midwest,” said artistic director Oskar Eustis in a statement. “If the culture belongs to everyone, it belongs to the citizens of Kenosha, Erie, and Saginaw as much as it belongs to Manhattan. We are thrilled to be bringing Lynn Nottage’s brilliant Pulitzer Prize-winning play across America.”

Sweat follows a tight-knit group of friends working at a factory in Reading, Pa., whose bonds are tested when the factory has layoffs. The play premiered at the Public in 2016 before opening on Broadway in 2017, and was nominated for a Tony Award for Best Play.

Initial casting for the tour includes Carlo Albán, Benton Greene, Hunter Hoffman, Steve Key, and Lance Coadie Willams. The tour will feature scenic design by Wilson Chin, costume design by Christopher Metzger, and sound design by Rob Milburn and Michael Bodeen. Performances in Minnesota will be produced in collaboration with the Guthrie Theater.

“Sweat tells the story of Reading, Pa., but it could be any post-industrial city across the landscape,” said Nottage in a statement. “One of the beautiful things about what we’re trying to do with the Mobile Unit National Tour is to link narratives and bring people not just in the communities into dialogue, but people across communities into dialogue and figure out how can we strategize and shift the national conversation.”